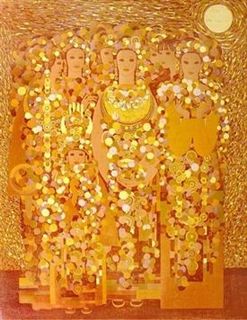 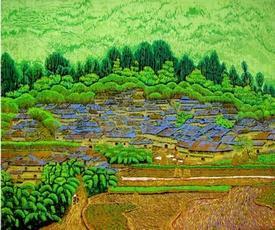 Another China - Recent Art from the Ethnic Southwest


The spring show at the de Menil Gallery features contemporary artworks from China’s ethnic minority provinces of Yunnan and Guizhou. Nine artists are showcased in the exhibition, seven of whom recently had work added to the collection of the San Francisco Asian Art Museum. Most of the works featured at the exhibition are reduction woodcuts, along with some more innovative works.
• Yongsheng Yang’s “Process III” is a monochrome accordion album of reduction woodcut process. This is a pioneering work based on the Chinese traditions of the accordion album book and multi-point perspective literati painting.
• Yuhui Wang’s dramatic forthcoming oil painting memorializing New York City’s Twin Towers is created with pigments he has developed that change colors with the application of heat.
• Jianshan Wang’s reduction woodcut “Miao (Hmong) Women in Bright Moon” employs a combination of symbolist approaches and allegorical and representational forms to build a mural-like ensemble of Guizhou`s Miao (Hmong) women in festival mood. This work was added to the collection of the San Francisco Asian Art Museum in 2008.
• Artist Qingxue Zhang, of the Tujia ethnicity, shows the reduction woodcut “Heavenly Bath”, which plays with the concepts of Greek and Chinese mythologies. He created it by weaving and lacing rich fabric patterns of Guizhou’s ethnic minority peoples over his matrix. This work was added to the collection of the San Francisco Asian Art Museum in 2008.
• Jianghua Zhao is of the Miao (Hmong) ethnicity. His reduction woodcut “The Impression of a Miao (Hmong) Village” is a landscape of the largest and most famous village of China’s Miao (Hmong) ethnicity.
• Xiaochun Zhang’s reduction woodcut series poignantly narrates his struggles with the four political mottos that dominated his life during China’s Cultural Revolution.
• Artist Haiping Li of the Hani ethnicity shows a couple of works from his reduction woodcut series “Daily Life”, which features luscious female lips appropriated from the increasingly common roadside billboards. They emit youthful pop-culture vitality while conferring a comment on the division between the haves and the have-nots, and the regression of women’s roles in China’s new capitalist economy.
With this exhibition, the de Menil Gallery introduces unique art from some of China’s and, indeed, the world’s most culturally rich and visually spectacular ethnic regions.
The spring exhibit at the de Menil Gallery runs from the beginning of April 2 - June 2 2009. The gallery is open Weekdays except Wednesday from 9:00 AM to 3:00 PM, weekends 11:00 am to 4:00 pm
Back
Groton School
Groton School Mission: To inspire lives of character, scholarship, leadership, and service within a diverse, inclusive, and close-knit community.
282 Farmers Row
P.O. Box 991
Groton, MA 01450
Tel: 978-448-3363
© 2021 Groton School. All Rights Reserved.