At the heart of Groton's Schoolhouse is the McCormick Library, where students and faculty find books, magazines, and research materials to support their coursework and to feed their personal reading interests.


The library welcomes students for individual and group study and for classroom instruction. They might visit the library with a class to bolster research skills, settle into a small study room for collaborative work, prepare for a test at a quiet carrel, or relax with friends or a good book in front of the fireplace.

Resources include an extensive collection of print books, well over one hundred print magazines and journals, national and local newspapers, and electronic databases that access hundreds of newspapers, magazines, and scholarly journals. The on-site book collection and the vast digital collections are easy to search through our online catalog.

Throughout the year, the library hosts special events and programming designed to instill in students a lifelong love of reading. "Books for Break" offers students an array of young adult titles as they embark on a school vacation, and the library's Summer Book Club matches students and faculty to read and discuss a book of their choice.

The library also houses special collections of Groton-related materials, including an alumni author collection and Grotoniana showcasing the history of the school.

Besides an extensive collection of books in print, Groton’s library offers access to numerous digital sources of information. 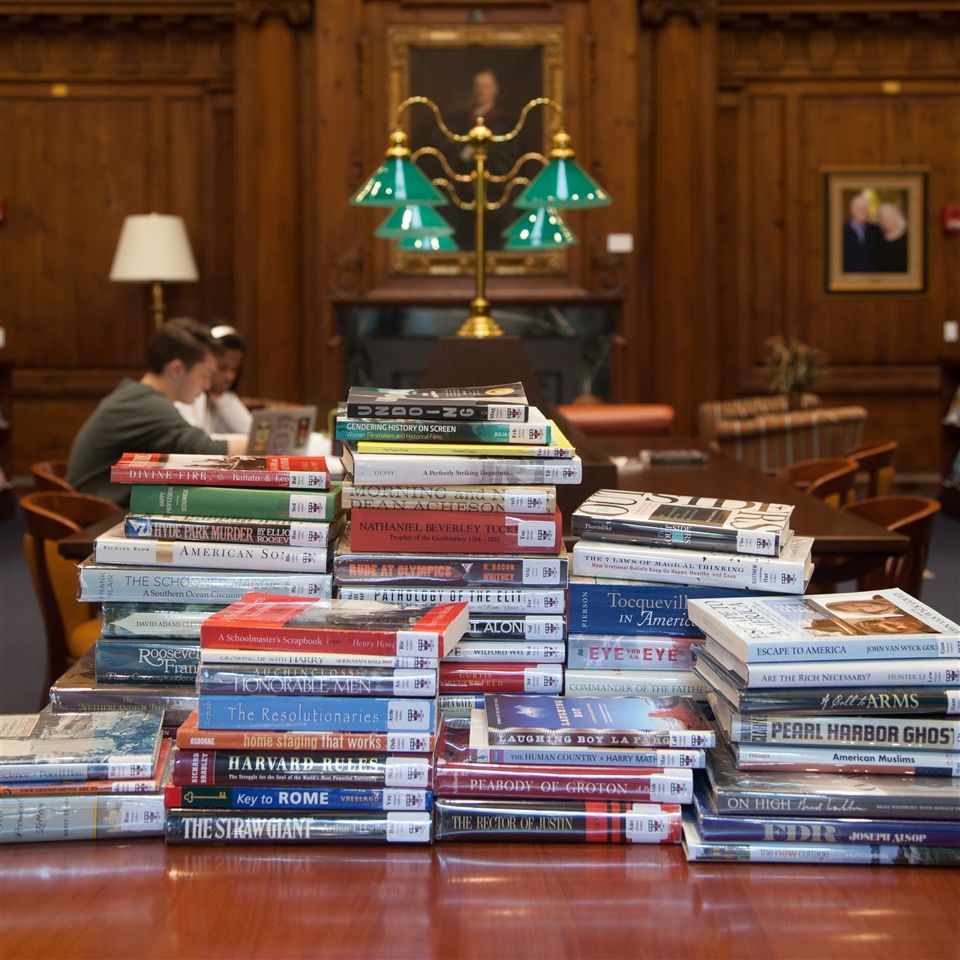 One point of pride in the McCormick Library is the collection of books written by Groton School graduates. Authors who expanded their writing skills—and their ideas—on the Circle range from diplomats and historians to current best-selling novelists and the Pulitzer Prize–winner Oliver La Farge, who graduated from Groton in 1920 and won a Pulitzer for Laughing Boy ten years later.


In all, the still-growing alumni book collection includes more than six hundred books by nearly three hundred authors. Some of the writers were remarkably prolific, such as Louis S. Auchincloss ’35, P’82, with fifty-nine books. Many fine writers have a single volume in the collection.

The earliest books in the alumni collection were published in 1919—Wade in, Sanitary! by Richard Derby 1899, War in the Garden of Eden by Kermit Roosevelt 1908, and Letters of an American Airman by Hamilton Coolidge 1915. More recently, two members of the Form of 2016 have published; and well-known contemporary novelists such as Ben Coes ’85 and Curtis Sittenfeld ’93, and cookbook author Merrill Stubbs Dorman ’95, keep the alumni book collection growing.

In the spring 2019 Groton School Quarterly, Michael Knox Beran ’84, P’20, ’23 (who has four books himself in the collection), wrote: “From the mysteries of Elliott Roosevelt ’29 to the thrillers of Ben Coes ’85, from the prep-school fiction of Louis Auchincloss ’35 to that of Curtis Sittenfeld ’93, from the insights into American foreign policy of Dean Acheson 1911 to those of Walter Russell Mead ’70, from the literary fiction of Pulitzer Prize–winner Oliver La Farge 1920 to that of Daniyal Mueenuddin ’81, from the recovery, by Andres Reyes ’80, of C. S. Lewis’s Lost Aeneid to the threnody for the WASP establishment of Joe Alsop ’28 in I’ve Seen the Best of It, the alumni collection abounds in books that are absorbing to read and bear witness to a high degree of literary sensibility.”
Groton School
Groton School Mission: To inspire lives of character, scholarship, leadership, and service within a diverse, inclusive, and close-knit community.
282 Farmers Row
P.O. Box 991
Groton, MA 01450
Tel: 978-448-3363
© 2021 Groton School. All Rights Reserved.