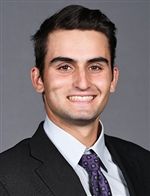 Baseball at Kansas State University
How did Groton prepare you to play in college?
I am grateful that Groton provided me the chance to compete in one of the most competitive leagues in New England as a freshman. I learned invaluable skills and lessons from seasoned coaches and talented teammates and leaders. I would not be the player, teammate, leader, and person I am without playing athletics at Groton.

What is your favorite memory from your Groton athletic career?
When I was in Sixth Form, I was fortunate to play on one of Groton’s best hockey teams ever. In the first round of the Piatelli/Simmons (Small School) TournamentSmall School playoffs, Groton went down 4–0 in the first period against defending champion Tilton. I remember sitting in the locker room after the first period thinking, “Not again,” as we had lost in the first round the previous year. The next period we came out and chipped away, with each goal giving us an additional boost of hope, energy, and belief. I remember looking up into the crowd after scoring the final goal of the game for the hat trick and seeing my friends and classmates celebrating our 6-4 comeback. All were dressed in black Groton gear screaming at the top of their lungs as they celebrated and shared this miraculous victory. As I walked off the ice, I was greeted with hugs and jubilant shouts from friends, teachers, and peers. This game is something I will never forget.

Do you have a highlight from a college game that you'd like to share?
In my second start for Kansas State University, I wWent 2 for 3 in second collegiate game, [2 hits in 3 at-bats] against Rice University, and I doubled in the team’s Big 12 debut against Oklahoma State.

What advice would you give to someone who wants to play a sport in college?
My biggest advice is to believe in yourself and work hard in all aspects of life. If you listen to your coaches, are a good teammate, work hard in the weight room, on the field, in the classroom, and outside of school, you will become a well-rounded person capable of achieving your goals. The belief that you can play collegiately will lead you in the right direction, but you must do more than the minimum.