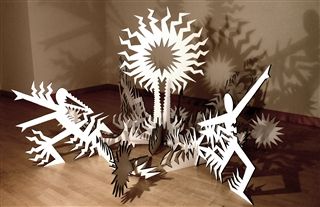 "The Insanity of Violence" by Gordon Chase

September 18–November 11, 2016
“Why do humans act so violently? Is this what it takes to survive, let alone to flourish and to thrive?

“In the twenty-first century, how is possible that so many terrible conflicts still occur, that countless refugees have to run or swim for their lives, and that so many perish or suffer when deliberately targeted as the ‘other’? Does the human race possess an urge for self-destruction? Is patriarchy to blame? Why is it so difficult for us to understand that life is sacred?”

Gordon Chase poses these questions in an artist’s statement, and tackles them in his artwork, on display this fall in both of Groton School’s galleries. Groton’s curators, Monika Andersson (de Menil) and Beth Van Gelder (Brodigan), cooperated to give as much attention as possible to Chase’s theme of non-violence—as Monika said, to “double up on this very important message.”

Gordon taught art for forty years, including at Groton School from 1971 to 1978. His “art with a social conscience” continues to provoke viewers to think about violence, life, and identity, and to forcefully question ingrained assumptions.
Back
Groton School
Groton School Mission: To inspire lives of character, scholarship, leadership, and service within a diverse, inclusive, and close-knit community.
282 Farmers Row
P.O. Box 991
Groton, MA 01450
Tel: 978-448-3363
© 2021 Groton School. All Rights Reserved.