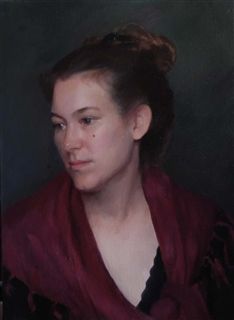 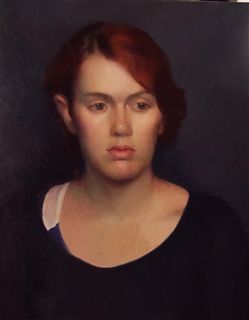 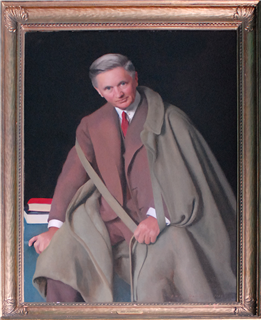 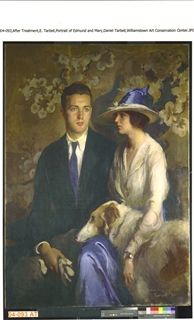 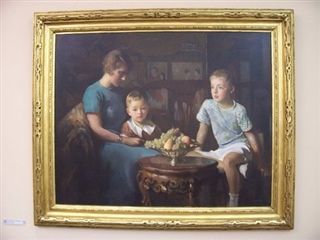 At a time when New York experimented with the gritty realism of the Ashcan School and flirted with European post-impressionism during the Armory Show of 1913, a group of men and women artists in Boston coalesced to develop their own distinctive style. According to one observer, “The Boston School became known for its use of vibrant color and attention to detail, utilizing light as a powerful emotive tool. Artists sought to evoke a sense of intimate space through illuminated landscapes and simple interior scenes, aided by soft, feathery brushstrokes.”

Thoroughly trained in both the rigors of the French Academy and impressionist techniques by the painting department of the School of the Boston Museum of Fine Arts, headed by Groton-born Edmund C. Tarbell from 1889-1913, they were known as the premier painters of the period. R. H. Ives Gammell, a Groton alumnus from the Form of 1911, studied at the Museum School and actually coined the phrase, The Boston School of Painting, which he defined in his book of the same name, published posthumously in 1986. In addition to painting continuously, Gammell taught in his own studio atelier from 1936 until his death in 1981. One of his most important students, Paul Ingbretson, continued to teach the lessons and methods he learned; it was at the Ingbretson studio that Groton resident Mary Minifie learned her craft.

Although Tarbell spent most of his adult career in Boston or New Hampshire, his family ties to Groton remained strong, and a number of his paintings descended through the hands of his Groton relations. These have now been collected and restored under the auspices of the recently founded Tarbell Charitable Trust, which loaned several of the artist’s principal works for this exhibition.

Gammell may be Groton School’s most distinguished painter-alumnus. It is safe to say that few Groton School boys of his day aspired to a career as a professional artist, but Sumner Welles, his formmate and the future assistant secretary of state, recalled that during rare idle moments he and Gammell used to wander the fields and hills around Groton dreaming about days filled with greater freedom when they would both be living the Bohemian life as art students in Paris.

After finishing Groton, Gammell studied at the Museum School under both Tarbell and American impressionist William McGregor Paxton before realizing his adolescent dream by traveling to Paris and training at the Académie Julian. Before he could finish, however, the First World War stopped his ambitions. After the armistice, Gammell enjoyed considerable success as a portrait painter, but he always aspired to take on larger-scale paintings with more intellectual themes derived from his reading in religion and classical literature. The intellectual foundation of his allegorical work was laid at Groton.

Gammell’s major allegory is a 23-panel series based on “The Hound of Heaven,” a poem by Francis Thompson that he had studied at Groton. Interpreted through the lens of the psychological writings of Carl Jung, this series incorporates the major intellectual themes that fascinated Gammell throughout his life.

Groton School is fortunate to own some of Gammell’s rarest pre-War paintings. In addition, the gallery has secured a particularly comprehensive selection of paintings from later periods in his career, all generously loaned by private collectors.

Mary Minifie (widow of Groton School faculty member Jonathan Minifie) was educated at Wellesley College and earned an M.F.A. from the Boston University School of Fine Arts. For the next 10 years she lived and worked abroad in Cairo, Oxford, and Vienna, exhibiting widely. In 1985, when she returned to the U.S., she began her study of portrait and the figure with Gammell’s former student, portrait painter Paul Ingbretson, and continued this study through 1997.

As the works in this exhibition demonstrate, the traditions of the Boston School of Painting continue to flourish in the 21st century. Excellence in design and drawing coupled with sensitively observed and rendered variations of color provide a universally recognized standard in picturemaking. Whether working directly from nature, as in a portrait, landscape, or still life, or giving pictorial representation to an intellectual concept, these skills provide the painter with a visual vocabulary which allows the finished painting to communicate with the viewer and to express the full range and impact of the painter’s intent.