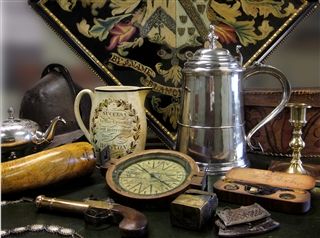 The Commonwealth’s Attic: Curious Treasures from the Massachusetts Historical Society

What is the meaning of historical objects? Why are they preserved, and why have they survived? Are they valued for their associations, aesthetic appeal, oddity, or simply the stories that they tell? Founded in 1791, the Massachusetts Historical Society is the oldest organization of its type in the United States. Thus, its members began to assemble documents and objects long before other museums began to gather their own collections. The understanding about what objects are truly museum-worthy has changed over time. Thus, objects once viewed as great treasures have been relegated to the basement and are now rarely displayed.

The winter exhibition at the de Menil Gallery contains more than 50 objects from the Society’s collections. The items are as varied as birds shot by Theodore Roosevelt on vacation in the Adirondacks, tea allegedly gathered from the shore of Dorchester Neck after the Boston Tea Party, an elmwood burl bowl removed from King Philip’s tent after he was slain in 1676, a cane made from a charred timber of the White House after the British burned it in the War of 1812, and bullets fired in the Boston Massacre. The exhibition also includes military hardware from the 17th century, handsome silver teapots and cutlery, and 18th-century cloaks and waistcoats. And what gathering of New England artifacts would be complete without some object associated with Paul Revere? In this case, his tin lantern. The show even includes some fakes, as well as objects that are not at all what they were assumed to be, on which visitors can test their sixth sense for fraud. Of particular interest for Grotonians may be the death mask of Philips Brooks, who chaired the School’s first Board of Trustees.