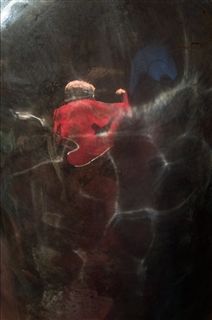 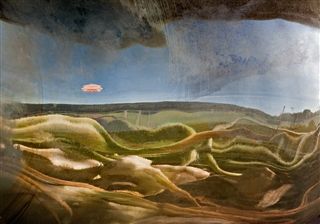 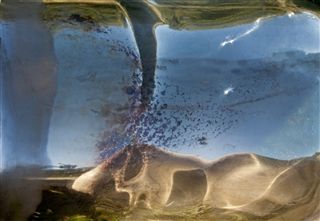 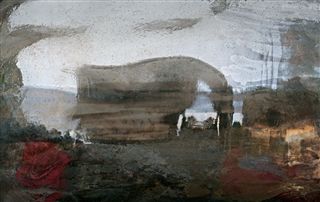 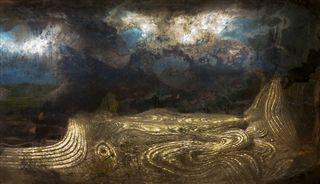 “‘Exit, Pursued by a Bear’: Reflections from Shakespeare” by Rosamond Purcell

For more than three decades, Rosamond Purcell has photographed natural history collections around the world. In 1987, she collaborated with Stephen Jay Gould to produce Illuminations: A Bestiary. More recently because of her status as “dean of natural-object, natural-light photographers,” she was commissioned by the Academy of Natural Sciences of Philadelphia to document its 200-year-old cabinet of extraordinary zoological specimens. From photographing objects in glass jars of formaldehyde, it was but a small leap for Purcell to construct her own wunderkammern of bizarre and decaying objects for the DeCordova Museum in Lincoln, Massachusetts, in 1989. During one of her foraging expeditions through wayside antique stores and open-air rummage sales, she spotted some antique mercury-glass jars, attracted by their reflective yet rough-textured surfaces.

It was not long before Purcell’s artist’s imagination found a use for her new acquisitions: photographs of scenes reflected in the bottle’s surface produced a surreal image of the original scene. When her friend, Michael Witmore, the director of the Folger Shakespeare Library, proposed a collaborative book on Shakespeare, these shadowy, almost surreal reflected images seemed the ideal way to illustrate Shakespeare’s allusive language. The poet’s verbal images, according to Witmore, produce a “script within a script.” Since Shakespeare worked in a theatrical medium that relied primarily on the actors’ bodies and voices, he had to rely on this “second script of images” to supply “the cinematic flashbacks, the digital animation, and luxurious soundtrack” that modern storytellers employ. Purcell’s photographs, once printed on soft-textured paper, can be enjoyed either as abstract compositions or as a more literal response to the Shakespearean texts that accompany each print. They depend on the mind’s eye and the imaginations just as much as the poet’s words to create a mood or dramatic scene.
A number of the images appearing in the Groton exhibition also appeared in “Very Like a Whale” at the Folger Shakespeare Library in Washington, DC, where the curators said it opened “a door into allegory, metaphor, and shifts of perspective.”