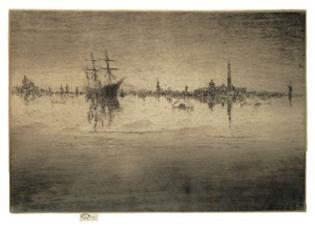 Venice and the Printmaker's Art

100 Years of Master Etching by British and American Artists
From the David and Patricia Cleveland Collection of American Art
The challenge of representing Venice's many moods and its shimmering light has drawn artists to that Queen of Cities for centuries. Whereas eighteenth-century painters like Antonio Canaletto portrayed the city's pageantry and most famous monuments for their Grand Tour patrons, the American painter and etcher, James McNeil Whistler (1834-1903) changed forever the way the city would be represented by seeking out for his subject matter the "Venice of the Venetians." In contrast to the elegant facades of the Piazza San Marco and the palazzi along the Grand Canal, Whistler worked in the poorer parts of the city, drawn by the special effects of light and dark created by its narrow passageways and back canals. The etchings he produced there marked a new stylistic departure for Whistler and caused him to be ranked together with Rembrandt as one of the master etchers of all time.
Driven from London by bankruptcy and adverse publicity, Whistler left for Venice in September 1879, on a three-month commission from the Fine Art Society to produce 12 etchings. Extending his stay to 15 months and producing over 50 etchings and numerous pastels, Whistler soon became the center of a group of younger American and British artists attracted by his innovative style and masterful technique. Long after Whistler departed, his students continued to produce prints of Venice that reflected both the technique and choice of subject matter of their more famous teacher, an influence that persists even to the present day.
Whistler worked on plates direct from nature, allowing the printmaking process to reverse the image, thus enabling his audience to perceive familiar scenes from an unfamiliar point of view. His Venice prints left some areas of the plate incomplete, eliminating extraneous details and creating a new, allusive, more "impressionistic" style. Whistler also proofed and printed his own prints, using ink washes to create dramatic chiaroscuro effects.
The 61 prints in the fall exhibition at the de Menil Gallery, on loan from the David and Patricia Cleveland Collection of American Art, include six by Whistler himself, including his famous "Nocturne," arguably one of the best etchings of the nineteenth century. The prints by American artists Frank Duveneck (1848-1919) and John Henry Twachtman (1833-1902), both of whom preceded Whistler in Venice, are also included in the show, while the persistence of Whistler's legacy is well documented in etchings by his students: John Marin (1872-1953), Clifford Addams (1876-1942), Joseph Pennell (1860-1926), Otto Bacher (1856-1909), Mortimer Menpes (1859-1938), and Walter Sickert (1860-1942). One of the unique aspects of this particular exhibition of Venetian prints is that it includes 15 etchings by John Marin, perhaps better known for his modernist watercolors of early twentieth-century New York and the Maine coast.
Whistler's particular way of representing Venice affected other artists in addition to his own students. Among those included in the exhibition are: John Taylor Arms (1887-1953), Donald McLaughlin (1876-1938), D. Y. Cameron (1865-1945), Frank Brangwyn (1867-1956), Muirhead Bone (1876-1953), Ernest Roth (1879-1964) and Abel Corwin (1857-1938). Three images by Wilfred Fairclough (1907-1996) bring the exhibition down to the present day.
Photo credit: "Nocturne," Courtesy of the David and Patricia Cleveland Collection of American Art.