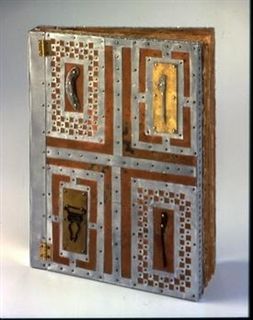 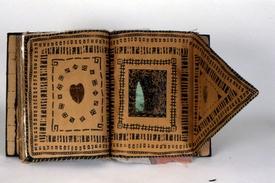 A Place for Everything: The Art of Peter Madden

The spring exhibition in the de Menil Gallery will be on view from April 7 to June 2. Madden is perhaps best known for his one-of-a-kind artist’s books. Using hand-made papers and specially crafted bindings he incorporates text and imagery that explore particular moments in his life. In addition to displaying a selection of books, this show will also include prints and photographs. Some of these are included in projects where the artist has sewn together sheets of waxed paper imprinted with pictures and text into paper “quilts,” revealing personal narratives in a less linear fashion. An inveterate collector of found objects, Madden has assembled a studio full of discarded treasures, which he assembles into patterns and then photographs and prints into cyanotypes, like the one shown illustrated. A special aspect of the spring show illustrates the artistic process, following the creative steps by which the ordinary detritus of daily life is transformed into art.
Born and raised in Greenwich Village, Peter Madden lives in Provincetown and Boston, where he teaches book arts and alternative photography at the School of the Museum of Fine Arts. He leads workshops throughout the United States and around Europe, including the Guild of Bookworkers, Massachusetts College of Art, Bennington College, the Center for Book Arts in New York City, the San Francisco Center for the Book, the Greek Island of Skopelos, and the Fine Arts Work Center in Provincetown. Madden studied at Pratt Institute, Parson's School of Design, and Massachusetts College of Art.
His work is exhibited in the collections of some of America’s leading museums and educational institutions, including Boston's Institute of Contemporary Art, the Museum of Fine Arts Boston, Harvard's Houghton Library, and the Center for Book Arts in New York City. In addition, he shows at galleries throughout the United States. Peter is the recipient of an Artists' Foundation Fellowship, a Saint Botolph Foundation Grant, and most recently, a Massachusetts Cultural Council award.
Back
Groton School
Groton School Mission: To inspire lives of character, scholarship, leadership, and service within a diverse, inclusive, and close-knit community.
282 Farmers Row
P.O. Box 991
Groton, MA 01450
Tel: 978-448-3363
© 2021 Groton School. All Rights Reserved.