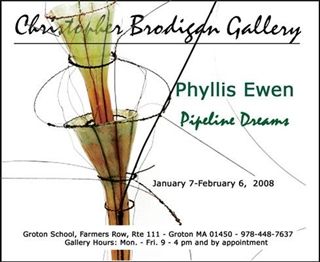 Phyllis Ewen is a Boston artist and a member of Brickbottom Artrist Studios in Someville, MA. In her wall installations, Phyllis Ewen combines laboratory equipment, three-dimensional drawing, and scientific texts to explore natural phenomena. Cast in latex, laboratory beakers, funnels, and tubes explore notions of containment: filling, emptying, pouring and holding. She has been interested for many years in the ways in which science and art intersect. The pieces in the series, Pipeline Dreams, funnel-shaped are whimsical and playful. At the same time, Ewen comments on environmental issues through the inclusion of wall text. The excerpts reference the flow of oil through Alaskan pipeline and its effect on wildlife, and to the political controversies over water resources.
In installations, such as (e)motion, FLUID DYNAMICS, and TURBULENT e/MOTION, Ewen layers 'found' text and illustrations from scientific textbooks with sculptural elements to create a three-fold visual language: object, written word, and mathematics. Ewen's texts are fragmentary, each chosen for its emotional resonance and reference to the human body; their meanings remain elusive and suggestive. Attempting to capture ephemeral moments, steel wires become linear elements to suggest, delineate and define space between the vessel-like pieces.