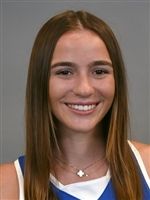 Field Hockey at Washington and Lee University
How did Groton prepare you to play in college?
Groton taught me how to work hard and play all the way through every single game. Everyone in the ISL was formidable opponents and every game could’ve gone either way, so having that for four years with three sports, I learned how to play until the last whistle. Additionally, Groton taught me how to be an effective team player by getting close with my team and connecting with all the other players. It is so important to have strong relationships on a team to ensure that you will play together well and trust everyone on the field.

What is your favorite memory from your Groton athletic career?
My favorite Groton memory was when the field hockey team played Brooks my sophomore year. The score was 3–2, and we won. It was a really hard game and our whole team was playing extremely well. I remember half-time so vividly because I came off the field and realized it was pouring rain. I hadn’t noticed the entire first half and so I said to my friend, “Oh my gosh, I can’t believe it just started pouring,” to which she responded, “It’s been pouring for thirty minutes already.” The game had been so intense I didn’t even notice that the field and I were drenched. The game was extremely fun and close the whole time, which made it a vivid memory I will not forget. (It was also a plus to win because I knew two girls on the Brooks team!)

Do you have a highlight from college that you'd like to share?
The highlight of my college career so far was winning the Old Dominion Athletic Conference (ODAC)  championship game. We were playing our rivals, the Lynchburg Hornets, who had beaten us the previous two years. Our whole team was connecting and playing so well–we dominated the game. Everyone on the field was giving 110 percent and that led to our 3–1 victory. When the last horn buzzed, a feeling of relief and happiness flooded my body, making all the hard work we put in all year feel so rewarding. Winning the ODAC gave us an automatic bid into the NCAA, where we were the ninth seed and we made it to the Elite 8. Our whole season this year was an overall highlight. Our final record was 21–1, only losing one game in the Elite 8 all season.

What advice would you give to someone who wants to play a sport in college?
My advice is to work hard and make sure you have fun. It sounds cliché, but I think it is so important that you play in college because you love your sport and want to continue playing for four more years. It’s hard work, but it is so worth it to make great memories and have fun with a new team. Overall, the recruiting process will be taxing and stressful, but all the long hours will pay off if you love playing your sport.