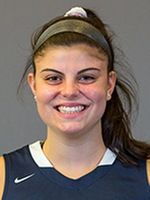 Basketball at Middlebury College
How did Groton prepare you to play basketball at the collegiate level?
Groton, both in the classroom and on various fields and courts, taught me a lot about team work. This helped me immediately, allowing me to bond quickly with my new teammates. In addition, Groton taught me a lot about time management, and this has made my workload at college extremely manageable. On the court, my teammates and coaches pushed me to always play my best, allowing me to improve my game. Finally, the support from my teammates and coaches at Groton gave me a lot of confidence that I am now able to use here in my life at Middlebury.

What is your favorite memory from your Groton athletic career?
My favorite memory was definitely my final basketball game. We played St. Mark’s and won on a buzzer-beater! The best part was that we had won two years prior on the same exact buzzer-beater play! It was amazing to share that experience (twice!) with my teammates. The excitement in the gym was palpable, and being crushed by Groton students rushing the court after the win was a thrilling experience I will never forget! See the play

What advice would you give to students who want to play college sports?
If you want it, work hard for it. Talk to your coaches and ask them for help in the recruiting process, and don’t be afraid to begin conversations with college coaches you would be interested in playing for. Communication is very important. Once you begin playing in college, make sure to always have an open line of communication with your coaches. Lastly, work to show them that you are 100 percent invested and willing to work hard for playing time.