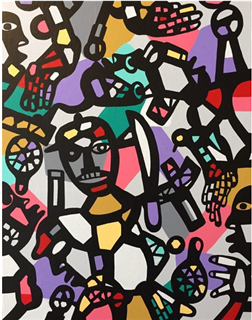 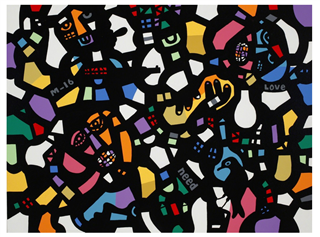 Each piece in Da Costa’s oeuvre is linked to a larger narrative, derived from observations from his life in Angola as a child, his exodus to Cuba for his studies, and his immigration to the United States.

His works are based on memories—Da Costa calls his creative process the door to “the spiritual world of my past.” Many of Da Costa¹s early works address the destruction, poverty, and despair wrought by war, based on his own survival of the Angolan civil war and the tragic loss of his family. More recently, he has begun to explore themes of the present and future, particularly his experiences and encounters with American culture. Drawing on the many influences from his tumultuous life, Nelson transmutes memory and strife into a stark allegory of subject and shape.
Back
Groton School
Groton School Mission: To inspire lives of character, scholarship, leadership, and service within a diverse, inclusive, and close-knit community.
282 Farmers Row
P.O. Box 991
Groton, MA 01450
Tel: 978-448-3363
© 2021 Groton School. All Rights Reserved.