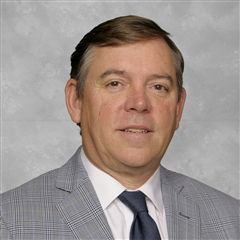 Dean of Admission and Financial Aid
igracey@groton.org
Dean of Admission & Financial Aid Ian Gracey has led the Admission Office at Groton since Fall 2007. One of the most senior deans of admission among the country’s top boarding schools, Ian was founding president of the Gateway to Prep Schools, an online common application system used by more than fifty schools; served on the Admission Directors Institute and the Character Skills Assessment Committee for the Enrollment Management System (formerly SSATB); and served on The Association of Boarding Schools (TABS) Admission Advisory Board, presenting at TABS annual meetings. He also has been on the faculty of the Crow’s Nest Institute, an annual retreat for experienced admission directors.

At Groton, Ian has taught an interdisciplinary course on the Italian Renaissance, led tutorials in the study of film, and coached the varsity baseball team. Preceding his tenure at Groton, he was an associate dean of admission, coach, and teacher at the Lawrenceville School, where he won the 2006 Shelby Cullom Davis Award presented to “the Lawrenceville faculty member who made a special difference by going the extra mile during the year.” He has also taught and served in admissions at Avon Old Farms School and New York University, where he received his MFA in film. Ian earned his BA from Tufts University, where he double majored in history and English.
Back
Groton School
Groton School Mission: To inspire lives of character, scholarship, leadership, and service within a diverse, inclusive, and close-knit community.
282 Farmers Row
P.O. Box 991
Groton, MA 01450
Tel: 978-448-3363
© 2021 Groton School. All Rights Reserved.