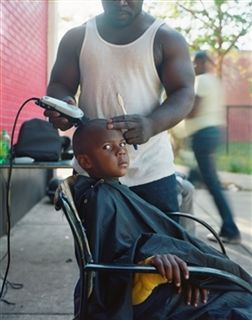 "We Shall," photographs by Paul D'Amato

In “We Shall,” Paul D’Amato uses large-format photography to paint the complex nuances within some of Chicago’s most troubled neighborhoods. Determined not to generalize or simplify, the photos defy glib media representations of the poor, of public housing, of urban decay.

D’Amato earned his MFA at the Yale University School of Art and has received numerous awards and grants; his work has been published in a wide range of newspapers, magazines, and books and shown in museums and galleries around the world.

The photographer recognizes how his own role intertwines with that of his subjects; he describes the relationship as “a kind of collaboration and performance on both sides of the camera. For it to work,” he says, “we both have to come to an accord on what will lead to the most emotionally resonant and believable picture . . . relationships are formed that allow us to try again, often as many as a dozen times over a period of years. The subjects perform enactments of themselves, which I shape into a photograph. You could say they write the lyric and I compose the melody.”

D’Amato urges viewers to distinguish the photograph from the person depicted. “The people in the pictures move, talk, respond to one another, and their appearance is constantly changing,” he says. “These images, then, don’t represent the west side, this class, this race, even this time. All of that has an existence that is independent of this work and is beyond the scope of photography.

“In the end, the work is about establishing and playing with a sequence of relationships: between myself and my subjects, between the formal elements in the pictures, between one image and another, and between the viewer and the photograph.”
Back
Groton School
Groton School Mission: To inspire lives of character, scholarship, leadership, and service within a diverse, inclusive, and close-knit community.
282 Farmers Row
P.O. Box 991
Groton, MA 01450
Tel: 978-448-3363
© 2021 Groton School. All Rights Reserved.