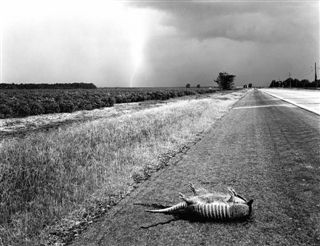 September 11-November 17, 2014
"Black and White” features photographs from two of Baldwin Lee’s photo collections: “Black Americans in the South” and “Comparative Studies in Black and White.”

The large-format prints of “Black Americans in the South” offer intimate glimpses into the everyday lives of Southern blacks. They contrast starkly in content and style with the less traditional “Comparative Studies in Black and White,” which compares black and white people quite literally by digitally juxtaposing their faces.

Lee, an art professor at the University of Tennessee, has received a National Endowment for the Arts Fellowship twice as well as a John Simon Guggenheim Memorial Fellowship. His photographs hang in the permanent collections of several museums, including the Museum of Modern Art in New York, the Museum of the City of New York, the Yale University Art Gallery, and the National Trust for Historic Preservation.

The de Menil Gallery is open 9 a.m. to 3 p.m. on weekdays (except Wednesdays) and 11 a.m. to 4 p.m. on weekends (except school holidays). The de Menil Gallery is free and open to the public.
Back
Groton School
Groton School Mission: To inspire lives of character, scholarship, leadership, and service within a diverse, inclusive, and close-knit community.
282 Farmers Row
P.O. Box 991
Groton, MA 01450
Tel: 978-448-3363
© 2021 Groton School. All Rights Reserved.