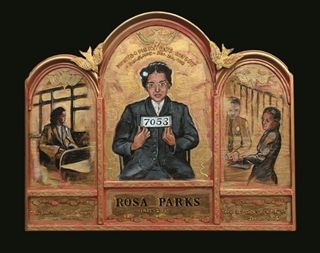 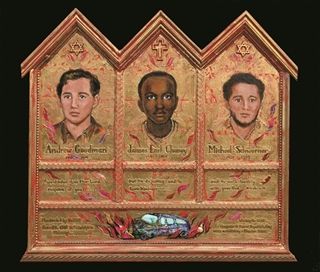 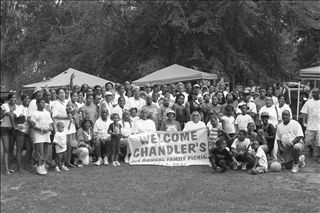 "Icons of the Civil Rights Movement" and "Staying Grounded"


”Icons of the Civil Rights Movement” contains 25 images of heroes and martyrs of the 1950s and ’60s civil rights movement painted on wooden panels. Each is surrounded in a gilded frame reminiscent of a Renaissance altarpiece and is embellished with scriptural quotations and found objects. All are painted with a red underground that occasionally shows through the gold leaf, following the technique used in Greek Orthodox iconography. These works join artist PamelaChatterton-Purdy’s twin passions for oil paint and collage, while at the same time expressing her deep religious faith that the historical movement for equal justice was an outpouring of the Holy Spirit. Chronologically, the images begin with the death of Emmett Till in summer 1955 and culminate with the inauguration of President Barack Obama in January 2009. Chatterton-Purdy’s creations remind us that the progress of the civil rights movement was all too often marked by the martyrdom of courageous men and women who died so that others might be free.
Chatterton-Purdy and her husband, David Purdy, a Methodist minister, were married in 1963 and witnessed the March on Washington that summer. That fall, she began her first job as an art editor for Ebony magazine, a unique vantage point for watching the Civil Rights movement unfold. “Icons of the Civil Rights Movement” has been exhibited at more than 25 schools and colleges as well as the Massachusetts State House and at President Obama’s inauguration festivities.

Photographer Mark Person’s large-format images in “Staying Grounded” reflect his experience with faith, family, and growing up as an African-American in rural Georgia. “This exhibit is very personal to me,” he says, “because no matter how far one goes in life, it’s always about staying grounded. You have to go through things to get through things. The images in ‘Staying Grounded’ reflect that.” Person has previously exhibited with Chatterton-Purdy at the Zion Union Heritage Museum in Hyannis, Massachusetts. (Closed February 7-10, 2014)
Back
Groton School
Groton School Mission: To inspire lives of character, scholarship, leadership, and service within a diverse, inclusive, and close-knit community.
282 Farmers Row
P.O. Box 991
Groton, MA 01450
Tel: 978-448-3363
© 2021 Groton School. All Rights Reserved.