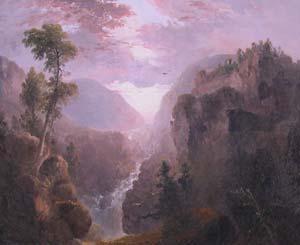 The winter exhibition at the de Menil Gallery at Groton School features Hudson River School paintings from the permanent collection of Fruitlands Museum in Harvard, Massachusetts. The display of twenty-three paintings, opening January 12 and closing March 2, 2003, features such well known practitioners of nineteenth century American landscape painting as Frederic Church, Thomas Doughty, John Kensett, Sanford Gifford, and James F. Cropsey. This particular selection of paintings was chosen to represent both the breadth of the Fruitlands collection and the discerning eye of Clara Endicott Sears, the museum's founder and an early collector of the genre.
In the early nineteenth century as the Romantic movement began to tighten its hold on the European imagination, American artists turned increasingly to depictions of this continent's untamed wilderness as a uniquely American response to the artistic concerns of the day. Such beauty spots as Niagara Falls, the White Mountains, and the Oxbow of the Connecticut as seen from Mount Holyoke (all represented in the Groton exhibition) appeared over and over again on the canvases of a variety of artists and helped to launch the first tourist boom in American history, as early Americans took to the railroads and steamboats to see these natural wonders for themselves. Reflecting the deep religious convictions of the times, many painters hoped their paintings would convey important moral lessons, as well as elevate the taste of the American public.
Back
Groton School
Groton School Mission: To inspire lives of character, scholarship, leadership, and service within a diverse, inclusive, and close-knit community.
282 Farmers Row
P.O. Box 991
Groton, MA 01450
Tel: 978-448-3363
© 2021 Groton School. All Rights Reserved.