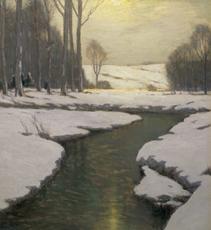 This fall, Groton School's de Menil Gallery features the work of Charles Warren Eaton: one of America's most innovative landscape painters in the early 20th century. Imbued with quiet nostalgia, many of Eaton's painterly canvases capture the New England landscape even as it was rapidly being transformed by an advancing tide of industrialization and urban sprawl. The 32 oils and watercolors from both private and public collections included in the show represent the first comprehensive review of Eaton's work in over a quarter of a century. On Friday, October 1 from 7 p.m. to 9 p.m., there will be an opening reception at the gallery with remarks by Eaton scholar David A. Cleveland at 8 p.m. The community is cordially invited to participate in this event.
Charles Warren Eaton began his career at a moment when American eyes had been long accustomed to the grand panoramas and precisely detailed foregrounds of the Hudson River School painters. While some of Eaton's contemporaries, like Childe Hassam, reinterpreted the landscape through a French Impressionist lens, other American painters known as Tonalists (of whom Eaton was a chief exponent), chose to follow the alternative example of the French Barbizon School, by painting smaller-scale, more intimate views of the countryside. Leaving their Impressionist colleagues far behind, the American Tonalists swiftly moved beyond their Barbizon roots into new territory where their striking palette of colors and greater tolerance for abstract forms made them the true forerunners of American modernism.
Back
Groton School
Groton School Mission: To inspire lives of character, scholarship, leadership, and service within a diverse, inclusive, and close-knit community.
282 Farmers Row
P.O. Box 991
Groton, MA 01450
Tel: 978-448-3363
© 2021 Groton School. All Rights Reserved.