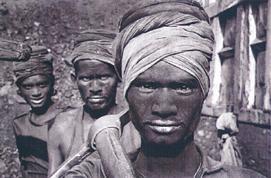 Sebastião Salgado's WORKERS: An Archeology of the Industrial Age

Photographs from Sebastiao Salgado's WORKERS portfolio will be on display at Groton School's de Menil Gallery from January 16 to June 5. Internationally exhibited and acclaimed, Sebastiao Salgado is a Brazilian documentary photographer "whose images of the world's poor, more than those of any other living photographer, stand in tribute to the human condition." Salgado began his multi-year humanitarian missions in 1973 when he depicted on black and white film the struggles of the indigenous South American peasants. Since then his lens has touched multitudes: from refugees and migrants in South Vietnam to people living through the civil wars in Rwanda.
Salgado's WORKERS portfolio offers "an archeological perspective of the activities that have defined hard work from the Stone Age through the Industrial Revolution to the present." With images from 26 different countries (taken from1986 to 1992) ranging from Brazilian gold miners and sugarcane harvesters to female Indian dam builders, "Salgado unearths the layers of ceaseless human activity at the core of modern civilization." Boston photographer Don West writes about this portfolio, "...the often gritty, grainy images and landscapes that Salgado lays out immerse you in the 'present' of the moment while connecting you to a history of colonial exploitation." As traditional concepts of production and efficiency are eroded by increasingly sophisticated technologies, WORKERS exists as an enduring tribute to those who still work with their hands.
While his photographs reveal the enduring plight of the world, Salgado also delves deeply into the individuals he photographs. Unlike the Western press, Salgado's photographs transcend "journalistic shorthand," since he refuses to portray his subjects reductively. Salgado lets us see, or re-see, neglected and economically invisible people as dignified human beings whose lives deserve our attention. This visual conflict between the often tragic, inhumane circumstances and the formal, dignified beauty of the subject causes viewers both to want to look away and simultaneously to look more carefully. "The images are both repelling and magnetic," says de Menil Curator Lindsay Commons. This kind of kinetic tension and emotional struggle is exactly Salgado's aim. "It is at this point," Commons adds, "that we feel a noted shift in our responsibility as viewers: we are suddenly called not only to look, but to act."
Back
Groton School
Groton School Mission: To inspire lives of character, scholarship, leadership, and service within a diverse, inclusive, and close-knit community.
282 Farmers Row
P.O. Box 991
Groton, MA 01450
Tel: 978-448-3363
© 2021 Groton School. All Rights Reserved.