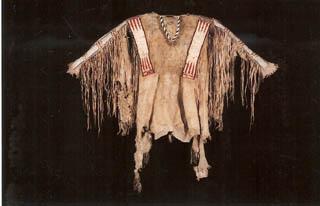 
"Brave Art" demonstrates the emergence of distinct tribal styles in the art of Plains warriors from the 1840s through the1880s, the Golden Age of Plains Indian Art. The exhibition consists of more than 40 pieces, ranging from tomahawks and war shirts to spoons and blankets. With highlights such as a rare Crow lance case, a Mandan war shirt, and a First Phase chief's blanket fragment, the show seeks to bring to a new audience the beauty of part of America's past through leading examples of Northern, Central, and Southern Plains artistry.
Lenders to the exhibition include the Peabody Museum of Archaeology and Ethnology at Harvard; the Millicent Rogers Museum of Taos, New Mexico; and the Splendid Heritage Foundation; as well as private collectors throughout the country. "Brave Art's" curator, Thomas Cleary, Groton '06, aged 18, spent almost two years assembling this exhibition and researching and preparing the accompanying catalogue. As the first student-curator in the school's history, Cleary said his intention in organizing this exhibition was to "remove dust from forgotten chapters of American history and revive understanding of a great culture."
John W. Tyler, Director of the de Menil Gallery, who has oversight for Groton School exhibitions and served as advisor to "Brave Art," remarked, "Even those who have little experience with this particular art form can easily feel the power and beauty inherent in each piece."
Back
Groton School
Groton School Mission: To inspire lives of character, scholarship, leadership, and service within a diverse, inclusive, and close-knit community.
282 Farmers Row
P.O. Box 991
Groton, MA 01450
Tel: 978-448-3363
© 2021 Groton School. All Rights Reserved.