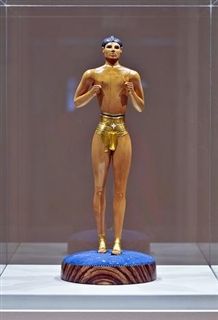 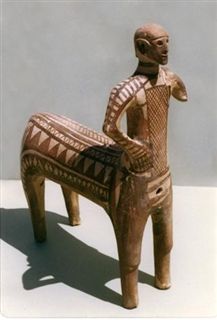 by Hugh Sackett
with Objects Loaned by the Metropolitan Museum, New York
January 12, 2009 - March 3
The current exhibition at the de Menil Gallery celebrates the long and fruitful career of Hugh Sackett, one of the school’s most distinguished faculty members. Though known to many Grotonians as a respected Latin teacher and a beloved dorm master, not all members of the Groton family are aware of his international reputation as an authority on Bronze Age Greece. Principally associated throughout his career with the British School in Athens, Mr. Sackett is best known for his work at five important archaeological digs that are the focus of the winter exhibition: the Dema and Vari Houses near Athens, the Unexplored Mansion at Knossos in Crete, the town of Lefkandi on the island of Euboea, and a previously unknown Minoan palace complex at Palaikastro in eastern Crete.
In addition to being respected for his meticulous scholarship and long list of publications, Mr. Sackett enjoys a reputation among his colleagues as an archaeological divining rod. Long before there were infrared aerial photographs, Mr Sackett’s uncanny instinct for identifying locations that would appeal to ancient peoples, would prompt him to say “dig here,” and, sure enough, artifacts and stone foundations would begin to appear, long hidden beneath the surface of the earth. His finds would be the envy of any archaeologist.
At Lefkandi, Mr. Sackett and his colleague Mervyn Popham uncovered an intact clay centaur of remarkable craftsmanship and design. Indeed, Lefkandi was supposed to have been a Dark Age site, its dates (ca. 1150-900 BC?) belonging to a period when the peoples then inhabiting Greece were presumed to have lost the ability to write, while contact with other parts of the ancient world diminished. Yet Lefkandi, controlling a key point on the Strait of Euboea, proved just the opposite to be true: evidence of trade with places as far away as Cyprus and Egypt were unearthed there, together with locally made pottery and jewelry fashioned by artisans of great skill. The objects found at Lefkandi forced textbook authors to rewrite their chapters on the Greek Dark Ages. The dig, begun by Popham and Sackett in the early 1960s and continues today under the direction of Dr Irene Lemos, who had been trained by them both. It is no exaggeration to say that the Lefkandi excavation is probably the most important excavation in the Greek world by any archaeological team after the Second World War.
More mystery and romance surrounded the excavation at Lefkandi when Sackett and Popham discovered an ancient heroon, or hero’s tomb. The structure itself was a prototype that would eventually evolve into the well-known peripteral Greek temple architecture]. Inside, an elaborate urn contained the ashes of the warrior chieftain, and nearby his urn were the remains of a chariot and the skeletons of horses sacrificed in his honor, as well as the corpse of a female found ominously with a knife at her neck.
Since 1983 much of Mr. Sackett’s attention has been focused on the British School excavation at Palaikastro, amidst the olive groves and beaches of a yet unspoiled section of the coastline of Eastern Crete. Here earlier surveys had suggested the remains of a partially submerged Minoan palace complex. During the final days of one summer’s digging at Palaikastro, Mr. Sackett’s team found some pieces of carved ivory of rare beauty, clearly parts of a kouros, a young male figure, perhaps an image of the young Zeus, since tradition held he was born in a nearby mountain cave. Fortunately, when the team returned the next year they were able to gather up the remaining pieces of what turned out to be the largest chryselephantine (gold and ivory) statuette yet recovered from the antique world. It is now the crown jewel of the state museum in Sitea.
Greek law forbids any of the objects discovered in Mr. Sackett’s various excavations from leaving the country, but Sean Hemingway of the Form of 1985, now a Curator of the Department of Greek and Roman Art at the Metropolitan Museum in New York, has arranged for a small selection of objects from the Met’s study collection to be on display in the de Menil Gallery. In addition, a replica of the Palaikastro kouros, made by Prof. Mark Moak of Rocky Mountain College, will also be on display, and visitors will have the opportunity to see one of the most important recent finds in Minoan culture as it might have originally appeared.
Back
Groton School
Groton School Mission: To inspire lives of character, scholarship, leadership, and service within a diverse, inclusive, and close-knit community.
282 Farmers Row
P.O. Box 991
Groton, MA 01450
Tel: 978-448-3363
© 2021 Groton School. All Rights Reserved.