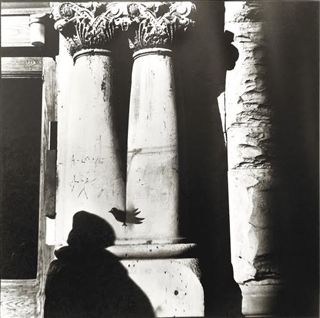 "In Light – In Shadow" by Bruce Cratsley

Photographs by Bruce Cratsley
These seventy-two vintage gelatin silver photographs, carefully selected by gallery director Monika Andersson, reveal the varied interests of Bruce Cratsley and his mastery of light and shadow. Most of the images were selected from the estate of Cratsley, who died in 1998, and have not been on display before.

Cratsley, often referred to as “the Master of Light and Shadow," captured urban scenes of New York, from store windows to graffiti to the streets of the city. His scenes from Paris and Venice, on the other hand, contain statuary and formal art. Other images, such as “New Year’s Day, 1987” and “A-Lone (Column and Shadow), Prince Street, NYC 1986” express dazzling light, while mystery emanates from “Rising Incense Smoke, Chez Moi, 1991” and “Burst Balloon, Midtown, NYC, 1990.” Cratsley’s great-niece, a current Fifth Former, assisted with cataloging the inventory.

Whether expressing the ordinary or reflecting life’s complex emotions, all of Cratsley's photos display the range of his talent with what he called “a beat-up, early 1950s twin-lens Rolleiflex “ with which “I joyously participate in the light of love, the love of light, and yes, the refuge of shadows.”