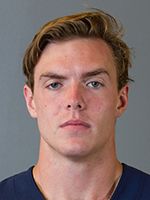 Football at Middlebury College
How did Groton prepare you to play college football?
Playing both football and lacrosse at Groton helped me learn how to lead a group of people. Groton varsity teams have different athletes from not only around the country but around the world, and having to bring together students from various backgrounds was an exciting opportunity my senior year. The coaching staff members of both football and lacrosse were unbelievably helpful in teaching me how to embrace the role of captain and, consequently, making me a better player, and more importantly, a better person.

What is your favorite memory from your Groton athletic career?
My favorite memory during my senior year has to be when the football team traveled to Brooks. The game was a blowout without a doubt, but every member of the team was committed to finishing the game with a full heart and giving maximum effort on each play until the game concluded. I remember our halftime gathering like it was yesterday; not one person was ready to give up, and for that reason alone, it is my favorite memory.

What advice would you give to kids seeking to play college athletics?
Have fun. The recruiting process is difficult, yes, and I have seen it consume several athletes over the years. But you must take a step back and realize what you have in front of you. You will never again get the experience to play alongside the close friends you grew up and matured with; I would give anything to go back and play one final St. Mark’s game. Embrace the incredible opportunity of being a potential collegiate athlete. Do remember exactly what it took to get to where you are now: all the help from Groton coaches and teachers alike, your parent's willingness to put you in a position to be seen by colleges, and most importantly the amount of effort and time you yourself have devoted to a sport you love. Be grateful.